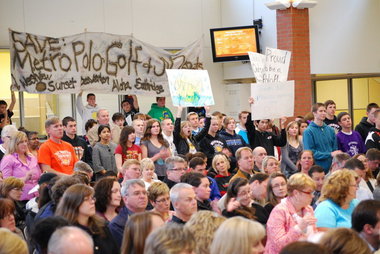 Southridge High School music teacher Robert Hawthorne is mounting a last ditch effort to get the Beaverton School District to slice more than five days from the calendar and use the savings to cut fewer teachers.
View full sizeWendy Owen / The OregonianAbout 500 people showed up at the Beaverton School District Budget Committee meeting on May 1 at Sunset High School to express their support for certain programs. Now, music teacher Robert Hawthorne is asking the district to cut more days to save more teachers

Hawthorne has created an online petition, asking the community to vote in support of cutting a total of 10 days next school year and nine in 2013-14. One day is the equivalent of about 16 teachers, including benefits.

Hawthorne said he plans to ask the school board Monday night to work with the teacher’s union to eliminate the additional days.

The board is planning to adopt the budget Monday, which calls for 344 reduced positions, five fewer days and increased class sizes, among a list of other reductions, to reach a bottom line of $302 million in operating funds — a $37 million shortfall.

District and union leaders this week said eliminating more days is a long-shot at this point because the negotiation process takes weeks, and nothing has been presented to either side, yet. The board has to adopt the budget by June 30.

“We believe it’s more important to save teachers and allow for class sizes to be smaller,” Hawthorne said.

Anecdotally, Hawthorne said he has heard teachers say they want to cut more days to save jobs.

But, he’s battling an already negotiated contract between the district and teachers that calls for five unpaid days next year and four days in 2013-14. In addition, 95 percent of the teachers, who voted on the contract, said ‘yes.’

“I don’t think we have that many selfish teachers,” Hawthorne said.

Hawthorne said teachers weren’t given other options when they voted.
It was ‘yes’ or ‘no’ to five days.

He said he believes teachers thought a ‘no’ vote would have resulted in no days cut from the calendar and even more jobs lost.

“I think an opportunity was hugely missed by our union,” he said.

Information given to teachers noted that there would be no further days cut or salary concessions beyond the ones they agreed to on the contract.

Asked if teachers understood that a ‘no’ vote would have restarted the negotiation process, Beaverton Education Association President David Wilkinson said, “I believe the members were well-informed when they voted.”

Neither Wilkinson nor board member contacted by The Oregonian supported rehashing the contract to add more furlough days.

“I don’t think it’s fair to second-guess the contract that was made and ratified,” he said.

Board member Sarah Smith, who pushed for cutting days over staff, said it’s time to move on.

“I feel we need to move forward with what we have,” she said, and noted that it would be the responsibility of the union to ask for the additional days.

Board member Karen Cunningham helped negotiate the teacher’s contract and said a lot of options were discussed, but the only formal offer to the union was for five days. She speculated that an offer of 10 days would have been rejected by union representatives.

“I think it would have been difficult for them to accept that without other financial concessions because it would be a pretty substantial cut in pay,” Cunningham said. “A little more than 5 percent.”

Cunningham and board member Jeff Hicks also said slicing days is not sustainable.

“We have no guarantee what we’re going to get from the state next year,” Cunningham said.

Meanwhile, Hawthorne, who has taught in the district for nine years, is watching pieces of the Southridge music program fade away. His job will no longer be full-time. Classes with lower enrollment such as jazz band, 21 students; percussion ensemble, 12 kids, and AP music theory, 15, were the first to go.

Elementary and middle school music programs will be reduced as well. The strings program was cut a few years ago in the district and band isn’t offered until middle school.

“What we’re doing is bad for students. It’s bad for the community,” Hawthorne said.

This site uses Akismet to reduce spam. Learn how your comment data is processed.